Based in Washington D.C. since its founding, MHARR was formed to represent the views and interests of producers of manufactured housing. A major source of the nation’s supply of non-subsidized affordable homes, the manufactured housing industry is federally regulated by the U.S. Department of Housing and Urban Development (HUD)   — the only segment of the housing industry to be regulated at the federal level. MHARR is dedicated to maintaining a regulatory framework which promotes both the availability and affordability of manufactured housing — an objective now enshrined in federal law thanks to the Manufactured Housing Improvement Act of 2000, which MHARR successfully sought, promoted and advanced to enactment. Its primary and enduring mission is to protect, defend and advance the interests of its members and the manufactured housing lifestyle for American consumers of affordable housing.

Since MHARR’s establishment, the production of manufactured housing has become increasingly competitive and complex. As the industry has matured, numerous state and federal agencies have sought to impose rules and regulations that could significantly impact its cost and availability as a prime non-subsidized housing resource for Americans at every rung of the financial ladder.

Within the industry, the voice of manufacturers — the segment of the industry most directly affected by federal regulation — has tended to be merged with that of other segments of the industry, including retailers, suppliers, finance companies and community developers. Each such segment has its own specific interests and perspective, but unless manufacturers’ views can be articulated, published and advocated independently, the representation of those views is unavoidably weakened by being merged into an “umbrella” representation, which necessarily must be the lowest common denominator among various diverse segments of the industry.

The industry has also witnessed the emergence of a new type of manufacturer with large retailer and financing affiliates. That segment of the industry may also have different needs than smaller and medium-sized independent manufactures. Consequently, the primary objective of the Manufactured Housing Association for Regulatory Reform is to enunciate the consensus view of manufacturers, so that their experience, understanding and approach will be considered in the formulation of any law, rule standard or regulation that is imposed on the industry.

Necessarily, though, the interests of manufacturers – and consumers – are unavoidably impacted by activity and developments affecting the post-production sector of the industry (i.e., activity and developments affecting manufactured homes and consumers once such homes leave the factory). Such activity – by government or quasi-governmental actors – can negatively impact both the utilization and availability of manufactured homes for large segments of the public and can significantly constrain that availability, to the extreme detriment of all concerned. Current examples of this phenomenon include the failure of the Government Sponsored Enterprises (GSEs) to provide securitization and secondary market support for manufactured home loans in accordance with existing law and discriminatory and exclusionary zoning and placement restrictions on manufactured homes in many more densely-populated areas of the United States.  Because of this indisputable reality and the fact that the long-term absence of any type of independent, dedicated national representation for the industry’s post-production sector has allowed such problems to multiply and fester, MHARR has taken (and will continue to take) the lead on these matters as well.

Ultimately, though, it is axiomatic that there is no regulation without economic cost — particularly for a federally regulated industry. That cost, inevitably, will be passed on to the purchaser. Overall, therefore, MHARR seeks an improved environment for the growth of the industry and for the availability of affordable manufactured housing to American consumers through fair, reasonable and cost-effective federal regulation. Furthermore, the Association is dedicated to reassessing all existing regulations periodically to determine their cost, merit and relevance, and to measuring each new law and regulation against the same criteria, with the principal objective of protecting manufactured housing consumers while simultaneously ensuring the continuing availability of safe, affordable, non-subsidized manufactured homes.

Attached for your review and information is a copy of a self-explanatory communication from MHARR to the incoming chairman of the House Subcommittee on Housing and Insurance. The purpose of 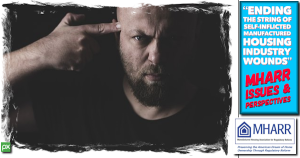 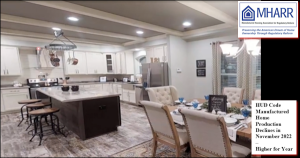 Washington, D.C., January 3, 2023 – The Manufactured Housing Association for Regulatory Reform (MHARR) reports that according to official statistics compiled on behalf of the U.S. Department of Housing and 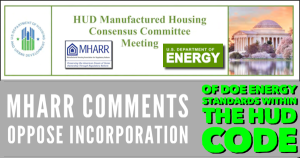 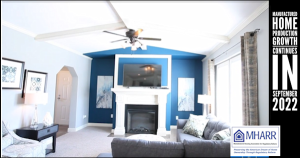 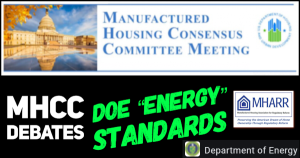 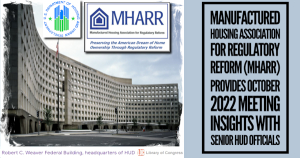 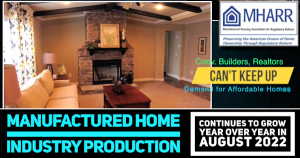 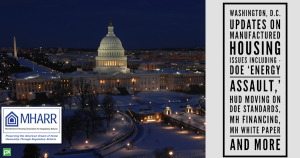