An MHARR delegation met with senior officials of the Federal Housing Finance Agency (FHFA) on July 11, 2019, including newly-confirmed FHFA Director, Dr. Mark Calabria. The entire focus of this meeting was on the failure of the two Government Sponsored Enterprises (GSEs) – Fannie Mae and Freddie Mac – to fully, properly, and, in a timely manner, implement the “Duty to Serve Underserved Markets” (DTS) mandate of the Housing and Economic Recovery Act of 2008 (HERA) and, most particularly, the implementation of DTS with respect to manufactured housing personal property loans. Both this meeting and its focus on the implementation of DTS are consistent with and pursuant to the directive of the MHARR Board of Directors, at its March 2019 meeting, for the Association to address and seek to advance key post-production issues, including discriminatory zoning and the availability of consumer financing for mainstream, HUD Code manufactured homes, among others.

MHARR stressed to the senior FHFA leadership present at the meeting, that more than a decade after congressional enactment of the DTS mandate, neither Fannie Mae nor Freddie Mac have provided securitization or secondary market support for a single manufactured housing personal property loan – a profound and inexcusable failure in view of the fact that such loans constitute approximately 80% of the manufactured housing consumer finance market according to U.S. Census Bureau data.  This failure not only limits the marketability and growth potential of mainstream HUD Code manufactured housing (which has seen a 10%-plus year-over-year decline to date during 2019) but, more importantly, harms moderate and lower-income consumers by stifling free-market competition within the HUD Code financing market and forcing such homebuyers into higher-interest loans. Even worse, while claiming an alleged “lack of data” as the basis for their long-term failure to provide support for the mainstream, HUD Code manufactured housing chattel financing market, both GSEs have ventured into programs for a supposed “new class” of manufactured home – costing as much as $220,000 – with, apparently, no data at all, thus continuing the pattern of overt discrimination against mainstream HUD Code homes and HUD Code consumers that Congress designed DTS to end.

Accordingly, MHARR emphasized the urgent need for the new FHFA leadership — consistent with President Trump’s express commitment to affordable homeownership, as reflected most recently by his Executive Order of June 25, 2019 regarding regulatory barriers to affordable housing – to put the full, proper and timely implementation of DTS back on track, for the benefit of the vast majority of manufactured housing consumers who utilize personal property financing to access the industry’s inherently affordable, mainstream homes, rather than prioritizing (as the GSEs’ have to date) far more costly market outliers (i.e., the so-called “new class” of manufactured homes) which tend to benefit only a few of the industry’s largest corporate conglomerates.  Moreover, with the next presidential election already looming large in Washington, D.C., MHARR stressed the need for rapid and targeted action to implement DTS for the benefit of the more than 80% of the HUD Code manufactured housing finance market that currently remains totally unserved by Fannie Mae and Freddie Mac.

While the new FHFA leadership team stressed that there are multiple significant issues affecting the Agency, as the federal regulator of Fannie Mae and Freddie Mac, they did recognize that DTS implementation needs to – and will be – addressed, consistent with proper risk management and other agency priorities. Based on the exchanges at this meeting, MHARR will continue to aggressively advance the full and proper implementation of all elements of DTS, but most particularly its application to manufactured housing personal property loans — which represent the vast bulk of consumer loans for mainstream, inherently affordable HUD Code homes, but still remain totally unserved by Fannie Mae and Freddie Mac notwithstanding Congress’ DTS mandate.  At the same time, MHARR will continue to closely monitor DTS activity by Fannie Mae and Freddie Mac and will keep Congress fully informed as well, as the need for oversight of this entire matter continues to become more and more evident. 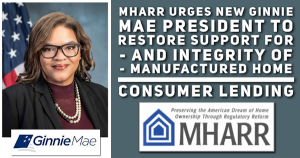 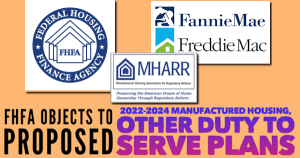 The Federal Housing Finance Agency (FHFA), as the statutory regulator of Fannie Mae and Freddie Mac and the federal agency responsible for implementation of the Duty to Serve Underserved Markets 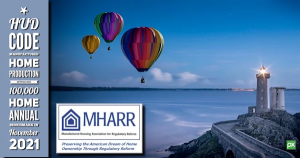 Washington, D.C., January 5, 2022 – The Manufactured Housing Association for Regulatory Reform (MHARR) reports that according to official statistics compiled on behalf of the U.S. Department of Housing and 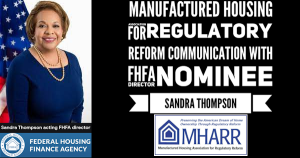 Attached, for your information and review, is an MHARR communication to Ms. Sandra Thompson, President Biden’s nominee to become the next director of the Federal Housing Finance Agency (FHFA). Ms. 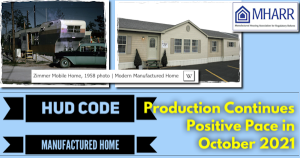 Washington, D.C., December 3, 2021 – The Manufactured Housing Association for Regulatory Reform (MHARR) reports that according to official statistics compiled on behalf of the U.S. Department of Housing and 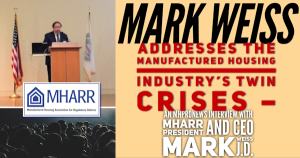 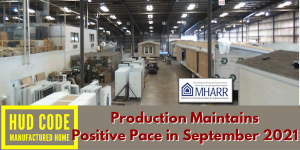 Washington, D.C., November 3, 2021 – The Manufactured Housing Association for Regulatory Reform (MHARR) reports that according to official statistics compiled on behalf of the U.S. Department of Housing and 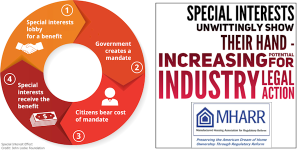 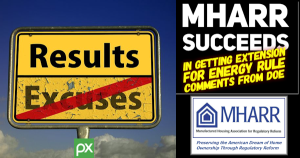 The U.S. Department of Energy (DOE), in a notice issued on October 20, 2021 see, copy attached has granted an MHARR request for an extension of the deadline for the 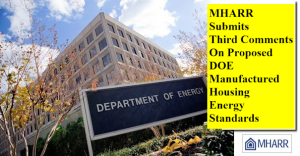