Washington, D.C., January 30, 2018 – On January 29, 2018, a delegation of officials from the Manufactured Housing Association for Regulatory Reform (MHARR) met with HUD Secretary Dr. Benjamin Carson, to provide the Secretary with a first-hand opportunity to hear the concerns of smaller industry businesses regarding the operation of the federal manufactured housing program and its failure to fully and properly implement the Manufactured Housing Improvement Act of 2000 (2000 reform law). MHARR participants in the meeting included James Shea, Jr., Chairman, Mike Cappaert, Vice Chairman, John Bostick, Immediate Past-Chairman, Mark Weiss, President and CEO, and Danny Ghorbani, Senior Advisor. The agenda for the meeting focused on the most critical issues currently facing the industry and its consumers, both with respect to the full and proper implementation of the 2000 reform law and consumer financing, including the Federal Housing Administration’s (FHA) Title I manufactured housing program (see, copy of meeting agenda, attached). 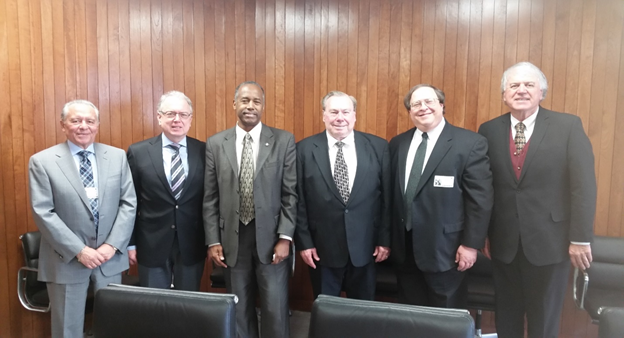 The MHARR delegation, in particular, briefed the Secretary on HUD’s 18-year failure to fully and properly implement the 2000 reform law, which was enacted with overwhelming bi-partisan support in both houses of Congress. MHARR outlined, during the meeting, four main components of the 2000 reform law that HUD has not only failed to implement under prior administrations, but has, in fact, affirmatively distorted, ignored and/or misapplied.  This has not only caused significant and unnecessary harm to the industry’s smaller businesses, but, more importantly, has deprived hundreds-of-thousands of moderate and lower-income families of the affordable, non-subsidized homeownership opportunities that only manufactured housing can provide.

In this regard, MHARR’s delegation thanked Secretary Carson for having initiated action to address critical regulatory matters within the federal manufactured housing program in accordance with Trump Administration Executive Orders 13771 and 13777. The MHARR officials pledged to work with the Secretary and HUD to advance this crucial undertaking, and as the only industry organization with institutional memory dating back to the original federal manufactured housing law more than 40 years ago, promised to provide the Department – during the current 30-day regulatory review comment period – with relevant historical background and remedial suggestions/solutions to restore the unique and essential federal manufactured housing program to full compliance with both the terms and objectives of the 2000 reform law.

As part of this dialogue, the MHARR officials also emphasized non-regulatory aspects of the 2000 reform law that should – and must – be properly implemented.  These include (but are not limited to); the appointment of a new non-career program administrator; the reform of program contracting procedures and the selection of a new monitoring contractor; full utilization of the MHCC in accordance with the 2000 reform law; and full implementation and enforcement of the enhanced federal preemption mandated by the 2000 reform law.

Further, the MHARR delegation advised the Secretary that with the failure of the Federal Housing Finance Administration (FHFA) to fully implement the Duty to Serve Underserved Markets directive of the Housing and Economic Recovery Act of 2008 (HERA), lower and moderate-income Americans would need, more than ever, the full utilization and incorporation of manufactured housing by HUD into all of its housing programs, as well as the reform and/or repeal of the “10-10” rule implemented by Ginnie Mae in 2010, which has largely eliminated Ginne Mae-supported FHA Title I financing for the 80% of manufactured homes that are sold and financed as personal property (chattel).

In Washington, D.C., MHARR President and CEO Mark Weiss stated: “MHARR sincerely appreciates meeting with Secretary Carson in order to thank him for the regulatory reform initiatives that he has started to undertake, and to fully apprise him and other key officials at HUD of the specific concerns of smaller industry businesses. MHARR looks forward to continuing to work with Secretary Carson and his team at HUD in order to restore the manufactured housing program to its original mission and goal – to not only ensure the safety of manufactured homes, but also to ensure their availability as the nation’s premier source of affordable, non-subsidized housing and home-ownership for millions of Americans.”

The debate (not that there ever legitimately was one) is over.  The law means what it says, and the time to restore the rule of law to the federal manufactured

Given the many industry controversies that often involve legal and regulatory issues, it seemed fitting to begin 2020 and this new decade with an in-depth interview with a true industry